Today was a day full of new foods to try.  It actually started off on great, albeit sweaty, footing.

After eating a pre-run apple, I completed a 4 mile running loop around my neighborhood at around 7:30 this morning.  My block is not the easiest to run around; I live on a mountain, so it’s quite hilly and rough.  But I managed to pull it out in about 45 minutes with only two walking breaks.  Had I waited another hour to do the run, it would’ve been far too hot outside!

When I got inside, I felt that typical post-run ‘not hungry’ fakeout.  So I showered, and waited until my body craved food.  And then it hit and hit hard, and the only thing that could save me…was this:

I’ve had these Trader Joe’s Cranberry Orange Bran Muffins in my fridge for a while now, and today seemed like a good day to pull one out and heat it up.

I’m not sure if putting it in the freezer was the best thing, because it ended up turning a very moist muffin into a very mushy one.  But after I popped it in the microwave, it turned hot and hearty very quickly.  I spread some Smart Balance on both halves for that little something extra.

Another new item for me today was this cup of Siggi’s Icelandic Yogurt.  I’ve had the unflavored and Grapefruit flavors, but not the Vanilla, so I was looking forward to this a great deal.  When I cracked open the canister, I was shocked to discover actual vanilla beans in the yogurt!
I ended up pairing it with three strawberries and a drizzle of honey:

The Trader Joe’s muffin was extremely thick and bursting with dried cranberry flavor.  It was sweet, but not cloying, and had a wonderfully smooth orange back note.  I had no problem eating the entire thing (and at only 240 calories I considered it a steal!).  The Siggi’s yogurt was unbelievably rich, and the vanilla beans gave it a complexity that blew me away.  It almost felt like I was eating a bowl of ice cream for breakfast, which is never a problem in my book!

At around 1:00, I decided on a quick lunch to tide me over while I went up to UCONN to watch a few friends star in a summer musical.  Carrots and almond butter seemed like a great idea, so I got out a tbsp of Woodland Farms Roasted Unsalted Almond Butter.   However, I decided to also throw in a tbsp of Maranatha Cashew Butter as well. If you haven’t had cashew butter yet, I suggest you do so.  It’s runnier than almond butter, but possesses a sweetness that peanut and almond butter can’t match.  It’s also got a creaminess to it that I find lacking in other nut butters.

I paired that combination with a slice of Great Harvest Bread Company Dakota Bread cut in half and spread with 1 tbsp Tofutti Better Than Cream Cheese and a tbsp of Stonewall Kitchen Strawberry Rhubarb Apple Jam:

I actually had quite a few more carrots than this, but before I got to my camera, a bunch of them disappeared into my mouth.  🙂  The sandwich was decadent but small enough so I didn’t get stuffed.  I absolutely love Great Harvest Bread Company, I urge you to find one near you!
Before I left my house I ate one juicy apricot (it was so juicy it almost got all over me and I had to eat it above the sink!) and I packed up a Nature’s Promise Nut and Honey Bar to eat at intermission.  It was absolutely delicious, like eating spoonful of peanut butter and honey (one of my favorite go-to snacks of all time!).
For dinner tonight my Mom made two different kinds of lasagna, but sadly due to my lactose intolerance I couldn’t eat one lick of it.  😦 I promised her that sometime soon I’d make a vegan lasagna that satisified everyone, but since I couldn’t eat her concoction I dug into the freezer for one of my Indian meals.

When I get frozen Indian meals, I tend to go for the chicken tandoori or the palak paneer (one of the only cheeses that doesn’t demolish my stomach) but this just sounded really good, so I gave it a try.  Of course, a puny frozen dish is not going to satisfy a runner, so I ended up sauteeing spinach, red pepper, and summer squash and dumping the eggplant bhartha on top of that, and served it with a bowl of v8 Broccoli Soup.

That stuff you see on top of my dish is nutritional yeast, a vegan ‘sprinkle cheese’ substitute.  Let’s just say that the best part of my meal was the soup.  When they said “mildly spiced” on the box they really meant ‘bland and really no flavor at all’! I was so disappointed, I had really been craving Indian food.  Next time I’ll stick to my unforgivably spicy selections and leave the Bhatha to the amateurs.
After my unsatisfying dinner, I was craving something sweet.  Enter my new great love affair: So Delicious Coconut Chocolate Ice Cream with two strawberries and Reddi-Whip!

OMG.  I was really worried about how much this thing would taste like coconut rather than chocolate, but thankfully the coconut flavor was only hinted at, allowing the chocolate to shine.  It was just as creamy and luscious as regular chocolate ice cream, and the strawberries gave it a tart punch.  Add on the Reddi-Whip and I was one happy girl.
Now I’m sipping on this Sobe 0 Calorie Strawberry Dragonfruit. 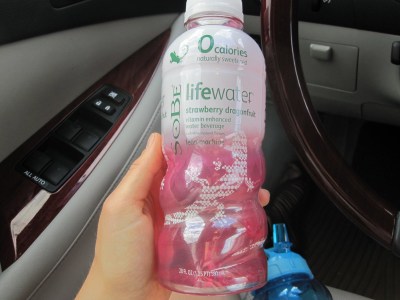 It’s good! Very sweet, which didn’t surprise me since it’s sweetened with stevia and not splenda.  Splenda, FYI, is awful for you.  It’s a chemical sweetener that should not be consumed.  Stevia, on the other hand, is incredibly healthy.  It’s made from plants and also has little to no effect on blood sugar so you don’t get a ‘high’ from consuming it.  Stellar!
Note to all: I don’t tend to measure out most things, but I still measure out my breakfast cereals, my nut butters, and my ice creams.  With nut butters I have to measure it out because if I eat more than one tablespoon, I get an allergic reaction.  I realized this the hard way today when my two tablespoons at lunch caused my arms to itch uncontrollably.
I’ve also taken to not using DailyPlate as much, although I do still check the math for my breakfasts and lunches, just to make sure I got the math right.  Typically I eat 1500-2000 calories a day, depending on my activity level, but I feel I function best when I hover around 1700.
The weekend of early mornings has started to catch up with me.  I must go now, but stay tuned: Lots more product reviews on the way! I went to Target today and stocked up on some delicious Archer Farms cereals.  I sense a big bowl of granola is in my future…