Man, I really have a sweet tooth.  I’m looking at all the sweet stuff I consumed today and I just sigh.  I really do love me some sweet things.

When I got home from New York, I went grocery shopping for some fresh produce.  I picked up a bunch of wonderful looking raspberries and edamame, and both of them were involved in my lunch: Romaine/Spinach Salad with Let’s Eat Edamame and Zucchini that I dressed with Champagne Vinegar and Agave Nectar, with a portioned serving of Mary’s Crackers: Original and a dollop of Tribe Hummus Baba Ganoush for dipping.

The raspberries were added a little bit later, unfortunately it wasn’t my greatest idea; it turned a sweet and savory salad into kind of a flavor hot mess.  But the crackers dipped in the hummus were delicious!

As always, I must have dessert: Fage 2% Greek Yogurt with Strawberries and one crushed up Stacy’s Cinnamon Sugar Pita Chip 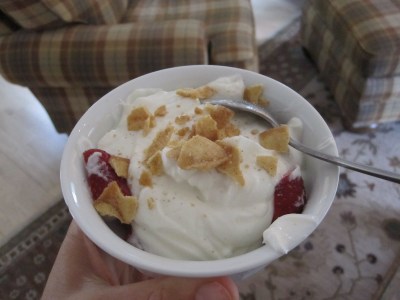 Ooooh, I could’ve eaten this for days.  It was so thick and creamy, like a big tart bowl of ice cream.  You would think I’d had enough of frozen concoctions! Just wait….

For my pre-workout snack, I decided to pull out one of our Flat Out wraps.  I love these things.  They’re packed with fiber and are a perfect workout snack.  I smeared it with 1 tbsp Tofutti Better Than Cream Cheese and 1/2 tbsp Dalmatia Fig Spread, and stuck it in the microwave for one minute. 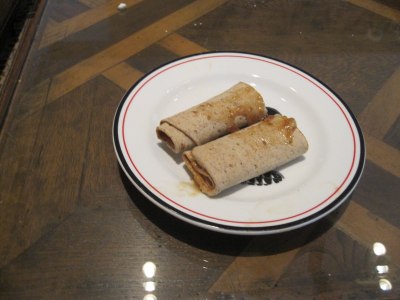 It was almost like a crepe, although not nearly as delicious as the crepes I enjoyed while in France with The Best Friend.  I should’ve shoved some Nutella in it!

I also had some watermelon, but I didn’t take a picture of it.

My workout was fairly simple, just 40 minutes on the elliptical, but I worked up a good sweat.  I took it easy today because tomorrow I plan on doing my early morning weights/elliptical combination (as well as a four mile run on Friday morning!) and also because I was exhausted from all the traveling and little sleep! But I felt like I got a good workout in.

For dinner, I was on my own (my parents went out to dinner as did my brother), and we didn’t have any thawed meat in the fridge, so I pulled out the remainder of my Nasoya Extra Firm Tofu and pulled together a quick but hearty meal to fuel my workout tomorrow morning: BBQ Baked Tofu with Sweet Potato Fries and Steamed Veggies.

So easy to make! I took about two servings of the tofu and brushed two tbsps of barbecue sauce on them, then baked them at 400 degrees for about 10 minutes.  After flipping them, I baked them for another 10.  Unfortunately, I should’ve drained and pressed the tofu, as they were still a bit soggy when I got them out of the oven, but they still were delicious.  The sweet potato fries, too, weren’t as crisp as usual, but I think I just had the oven in the wrong slot.  They still tasted wonderful with the ketchup smeared all over them!

Also, I have a weird habit of eating my vegetables first before I eat anything else.  Is that odd?

And I had promised myself I wouldn’t eat a dessert tonight after last night’s gorging, but I realized I had enough wiggle room in my calories so…out came the Haagen Daz’s.  This was inspired by a dessert I saw on Meghann’s website.  Go check her out, she’s so inspirational to me as an aspiring runner!!!  And her recipes and meal ideas are so cool. 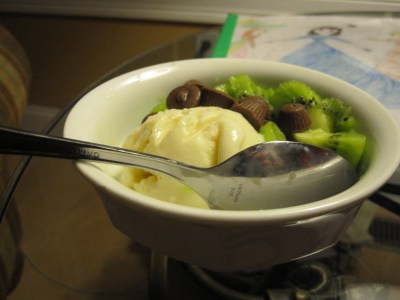 I could get used to this ‘ice cream every night’ diet.  Ever since I found out it’s a bad idea to consume heavy amounts of fruit after a big meal (as far as blood sugar absorption is concerned it’s like putting a Corvette in back of a Mack Truck; hello bloat!), I’ve explored the idea of introducing chocolate and ice cream back into my daily diet.  That way, I don’t feel deprived and end up bingeing like I used to.

I’m a firm believer in the ‘treat yourself every day’ idea.  As long as my pants fit, this is the way it’s going to go.  I’m even excited to rock a bikini next week in Avalon! I’ll probably use that week as a guide to keeping fit on vacation.  Although I’m not going to lie, sometimes you just gotta throw caution to the wind and do it up!

Coming up tomorrow: What I pack for work, plus a review of Archer Farms Muesli!