Yes.  YES.  I think I created a masterpiece tonight.

But first, let me discuss my lunch.

When I got to work, I bought a Starbucks Chamomile Tea, venti.  This proved instrumental in settling my stomach and warming me up (the bar I work in can get unbearably cold!)

Usually when I go to Starbucks I get an iced coffee, but today I was really craving tea.

My lunch was beautiful and delicious.  Where I work, most of the options on the menu are ribboned with fat, covered in cheese, and served with a healthy (or unhealthy) portion of french fries on the side.  Were this five years ago, I’d be in heaven and get cheesesteaks and fries til kingdom come.  But now, I go a different route.

I always order the exact same thing: a Garden Salad with Grilled Chicken, no tomatoes, and either a side of broccoli or asparagus.  Both of these veggie sides are boiled rather than sauteed, so I usually get them and dip them in a bit of ketchup.

Now, that sounds a bit boring.  But check out this beauty!

And check out the asparagus.  Sometimes when I order this, they’re the size of my head.  But today they were thin and perfectly sized.

The only problem I had with them being on the tiny side was that they proved a little more difficult to dip into my ketchup.

I ended the meal with a plum I had packed from home.  This thing was way too juicy.  When I bit into it, the entire skin slid off!

The rest of work was uneventful, save for two rogue orange slices that may have found their way into my mouth.

When I got out at 4, I snacked on a Blueberry Clif C Bar.  I love these bars because of how thick the topping is! It’s almost like a Larabar in its consistency.  Now if only Larabar came out with a blueberry pie bar…

I ended up taking a detour to Whole Foods at the request of my mother.  I am dangerous when inside
Whole Foods because I always want to buy something that I’ve never eaten before.  With the exception of tahini (maybe I should have gotten a roasted brand instead of raw), all of my impulse buys have been a total success.  I ended up buying Rainier cherries (in preparation for a crumble I’m making this weekend!), vegan chocolate chips (in preparation for vegan cherry scones I also have on my list), pumpkin butter, buffalo coated artichoke hearts, and flax tempeh.  I’ve tried rainier cherries and pumpkin butter before, but the rest are totally new to me.  I’ve always wanted to try tempeh because tofu can damage your hormones if taken liberally, so tempeh seems like a good substitution.  It’s a bit higher, calorically, than I am used to with tofu, but I have low-calorie pitas that seem like a good fit.  I think the buffalo artichokes and the tempeh, along with some vegan cheese, would make a brilliant combo.

When I got home, I immediately started making my dinner.  I had been dreaming about it for the past few days, ever since I purchased a box of cornbread mix by Krusteaz.  I thought about making a vegan version of it, but didn’t think it would end up being very good.  Oh my gosh, was I mistaken.

Basically, I followed the directions on the back of the box to the letter, but I made these veganizing changes.

Instead of 1 egg, I mixed 1.5 tsps EnerG Egg Replacer with 2 tbsps of warm water.
Instead of 3/4 cup of milk, I put in 3/4 c Silk Original Almond Milk.
And instead of 1/3 cup vegetable oil, I used 1/3 c Earth Balance Vegan Butter.


I combined these ingredients with the box of cornbread mix, placed it in a pan and baked it at 400 degrees for about 25 minutes until a knife inserted into the middle of the mixture came out clean.

While the cornbread baked, I stuck 2 cups of Imagine Creamy Tomato Basil Soup into the microwave.  When it was done, I chopped up 5 brussels sprouts and nuked them in a Ziploc Steamer bag.  I snacked on carrots while I did this:

The soup was…ehhhh.  Really, really bland.  I had to add salt, pepper, AND curry powder to get this thing to taste special.

Luckily, my steamed brussels sprouts proved a lot tastier.  I seasoned them, but really you can eat them plain.
Once the cornbread was out of the oven I cut it into about 12 equal slices, then took two out of the pan and drizzled them with honey. 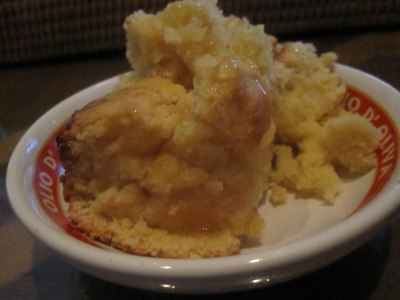 OMG!
Best cornbread I have ever had.  EVER! I want to make this all the time.  I’m sure I’ll work my way through the pan (it’s taking everything I have not to rush into the kitchen and scarf the rest of it!).
I can already think of all the different things I can eat with this cornbread.  Yogurt tomorrow morning.  Soup in the afternoon.  Baked beans at dinner.  The possibilities are endless. 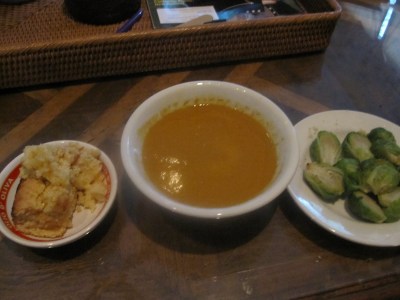 It was a little too much cornbread for the soup, and I knew if I finished it I would be too full for dessert.  So I ended up slathering the remaining bread with pumpkin butter and Tru-Whip, a vegan alternative to Cool-Whip.  It took an already delicious bread to another level.

I’m having a love affair with this stuff.
Now, off to watch some Criminal Minds and head to bed.  I’m exhausted!
Night!