Let’s just get right to it, shall we?

Bella Eats Banana Date Bread
Greatest. Banana Bread.  EVER.  I stayed entirely true to the recipe except for three small changes-I used regular white sugar since I didn’t have any turbinado (something I have remedied since baking this!), subbed an Ener-G Egg Replacer for the egg because our eggs were past their expiration and I cut out the chopped apples.  I figured it would be moist enough on its own with the applesauce and bananas and dates, and I was right.  This baby is rich, but incredibly healthy!  Check out those nutritional stats! Although I cut mine into 10 pieces so it actually clocks in at 162 calories per slice.  Don’t care.  I had this yesterday morning for breakfast alongside my Greek yogurt and then had it again today with my egg frittata at lunch.  It is the perfect bread whether you smear it with butter or pumpkin butter (but try the pumpkin butter, it will blow your mind).
You know what’s also really good, particularly after a long days’ work and you just want something quick and dirty and kind of amazing?

Morningstar Farms ‘Chikn’ Nuggets with Rutabaga Fries
Yesterday at work every other person ordered the chicken tenders and fries, and the smell was driving me insane (and the Koka Moka ProBar I ate for lunch really wasn’t cutting it).  I knew it had to happen, so I made it happen.  And I think cooking the nuggets in the oven rather than nuking them was the greatest decision; it gave the nuggets an amazing crunch! And these things tasted like genuine chicken, although slightly lacking in intense flavor.
Also on the side? Honey to dip the nuggets in.  Anyone else dip their chicken nuggets in honey when you ordered them at McDonalds? I don’t do fast food anymore but ohhh I missed that combo.  It was incredible and nostalgic!

Dessert was a tiny but overflowing cup of cherries with two pieces of dark chocolate. 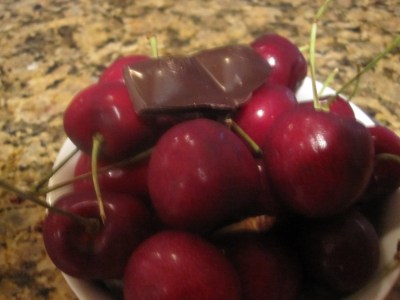 Then, I was going through my pantry and discovered a jar of Smart Balance peanut butter that had about .75 of a tablespoon left in it.  I was thrilled, because that meant it could serve as a carrier for a breakfast I had read about countless times on health and food blogs:
OVERNIGHT OATS IN A JAR

For the overnight part of my overnight oats, I threw into the jar:
1/3 c Bob’s Red Mill 10 grain Oat Bran
2/3 c Almond Milk
1 tbsp Bob’s Ground Flax Meal
Then this morning I added:
1/4 c Great Harvest Groovy Granola
1/2 chopped microwaved apple (I ate the other half raw)
Handful blueberries
1 dollop Dalmatia Fig Jam
This was amazing, but the peanut butter didn’t go all gooey the way it does in hot oatmeal.  Next time I’ll do hot oats.  I’ve got a jar of White Chocolate Wonderful that is on its last legs.  I’m thinking it’ll be stellar.  Although I’m slightly devastated that I accidentally left my jar of Justin’s Maple Almond Butter down at our beach house.
Tonight I had yoga, and I assumed it would be an all-levels class so I decided to snack on a bowl of Puffins with almond milk, then do 25 minutes on the elliptical to give myself a little bit of sweat before the class.  I got to yoga and found out the teacher I had wanted to take from was giving a Power class instead.  There was an all-levels going on as well, but I ended up saying ‘screw it’ and took the Power, telling myself I would rest if it became too strenuous.
Well, aside from slightly falling out of half-moon and forcing myself back into child when our thirteenth holding plank became too difficult on my wrists, I rocked that power class! I even got compliments on my Warrior Two.  The big moment of class came when our teacher told us to attempt Crow, which is one of the hardest poses for me.  I managed to get into it for about 2 seconds, and almost gracefully was able to jump back into full plank from it! I was so proud of myself.
Our teacher (a serious athlete who taught our class after having gone for a long run in the heat!) said something that stuck with me tonight.  She said, “This moment is the only one you are guaranteed, so make it count.” Another thing she said as we got into our Warrior Two was “Smile! You’re in yoga! The best part of your day!” And I grinned like an idiot.  I always feel so proud and honoring of my body before, during, and after a strong yoga practice.  I honestly can say that yoga has changed my body image as well as my life.  It is so positive and reinforcing.  You can feel yourself vibrating in each pose.
Long story short, DO YOGA.
After class, I was zonked and in zero mood to make anything for dinner.  Thankfully, Mom took care of that!

Salad with pepper and lettuce, dressed in balsamic vinegar and cornbread croutons (nobody likes a naked salad)
Newman’s Own marinated grilled chicken
Olive-oil rubbed grilled corn on the cob with salt and pepper
Slowroasted rosemary red bliss potato medallions (that I dunked in ketchup, OBVIOUSLY)
And my own addition of a sliced carrot because this dish was lacking in some veggies.  I like a lot of color on my plate, so it needed a bit of pop!
It was a gorgeous, delicious dinner, and naturally I was craving something sweet afterwards.  After killing my appetite, yoga suddenly unleashed itself on my system and I was HANGRY.

1/4 cup Edy’s Slow Churn Peach Pie Ice Cream (and 2 extra tbsps) with one teensy chopped white peach and Reddi Whip, along with a freshly chopped cherry in there somewhere.
I’ve been dreaming of this combination ever since I bought this ice cream, and it didn’t disappoint.  It was decadent and so creamy, almost like a peach cobbler a la mode.  The ice cream even has pie crust in it; at one point I bit into what i assumed was a big chunk of my chopped peach and it was a humongous piece of pie crust! Absolutely delicious!
Tomorrow I probably won’t have any food for you.  It’s my day off, so I plan to go vintage shopping with The Yoga Master and perhaps go for a leisurely swim before my dinner plans with the parents at our favorite hometown restaurant! Can’t wait!
Sidebar: I wish I had gotten into this season of So You Think You Can Dance, but every time I’ve heard about it it’s to do with someone leaving because they got injured! I hope the remaining finalists take care of themselves!