Oh boy.  I can feel it in my bones that it’s definitely that time of the month.  My hormones are threatening to throw a full-scale rebellion!  And my tummy has been…let’s say disagreeable.

Thankfully I have some yummy eats to make up for it.

Sunday’s breakfast after a workout with my main man Billy Blanks and 30 mins on the elliptical:

And a Blueberry Mango Bran Muffin from Trader Joe’s.  This was absolutely delicious but where the heck was the mango?!

The awesome Lululemon SIGG bottle I got.

Sidebar: When I first attempted to lose weight, in ninth grade, Billy Blanks Tae Bo tapes were the thing that almost got me there.  The combination of dance, cardio, and kickboxing kicked my ass, and I loved it.  And secretly, I felt like a ninja doing it.  Ever since then, I pull out his tapes and DVDs when I want something a little different.  Did I mention that whenever he comes out with a new line of workouts, I’m first in line to buy them? I’m obsessed with both him and his daughter, Shellie (the screaming maniac working out to his right in every video).  She’s fierce!

I believe my lunch this day was an Iced Chai from Starbucks, a Clif Mojo, and a banana.  Ew.  I mean, it tasted good! But I miss my salads!

Dinner took the form of a V8 Garden Vegetable Soup with 3/4 cup of Morningstar Farms Soy Crumbles to thicken it up a bit.

Paired with, of course, 1/2 a Philly Soft Pretzel…and I may have eaten the other half as well.  I was HANGRY.

Followed by a large microwaved Fuji apple topped with cinnamon and ricotta cheese. 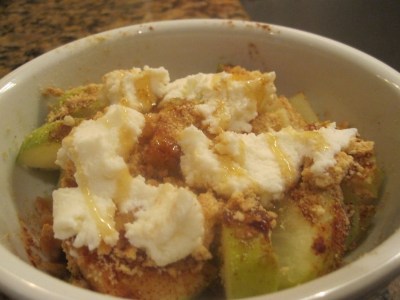 I’m also obsessed with this local wild honey I got from the grocery store.  It’s got such an intense floral flavor, so much better than the Suebee stuff! (although I love that honey too)

Monday, after an INCREDIBLE 5 mile run outside in the gorgeous, non-humid weather (it’s amazing how much humidity can effect you on a run! I felt like a superwoman afterwards!) 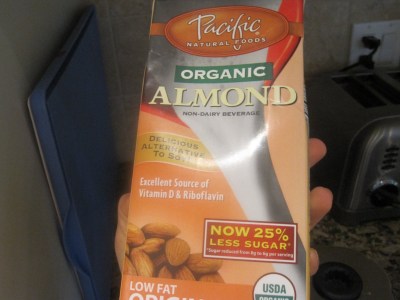 The verdict? Sweet as hell, but not nearly as creamy as the Silk stuff.  I prefer it to be creamy, as it reminds me of the texture of whole milk.  But this stuff was still great!

I tried it in one of my protein smoothies:

I think that was all I put in it…and check out how much was left in the blender! Although keep in mind I had slurped out a bunch of it before I took this shot.

The other day Mom caught me drinking out of the blender and joked she wished she knew how to work the camera on her phone.  Well, it happened Monday! 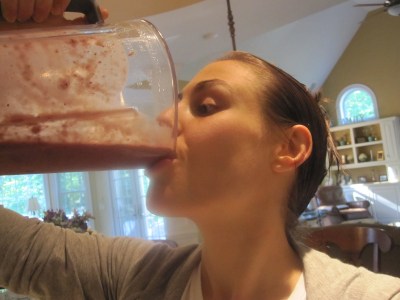 This was AWESOME.  Chocolately, but with a kick from the caffiene (there’s actually caffiene in it!) I love NuGo so much!
This is probably a good time to show you my plethora of protein bars…and I just bought more the other day.  *hangs head!*
Bowl One:

This is supposed to be for my mid-morning, under 200 calorie bars.  But some ProBars snuck in there.
Bowl Two:

My Meal Replacement Bowl.  You never know when you’ll be away from food during a mealtime and need something quick.  I ADORE ProBars.  Not the one I had today, but that comes later.
Today…oh, today.  Today I had something I’ve been envying for quite a long time. Angela from Oh She Glows makes these layered parfaits using banana soft serve (something I love) and overnight oats (something else I love).  Today I decided would be the day I tried it.
Last night I put into the fridge 1/4 Bob’s Red Mill Muesli, 1/4 c Bob’s Red Mill 10-Grain Hot Cereal, 1/2 c Pacific Almond Milk, and 1 tbsp Bob’s Red Mill Ground Flaxseed Meal.

This pic was taken this morning.  It’s all thickened up!
After my 4.5 mile run on the treadmill, I pureed a small frozen banana with 1/4 cup frozen blueberries, 1 tbsp cocoa powder, and 1 stevia packet.

Then I scrounged around for a glass, layered it up, and topped it with a crapload of blueberries. 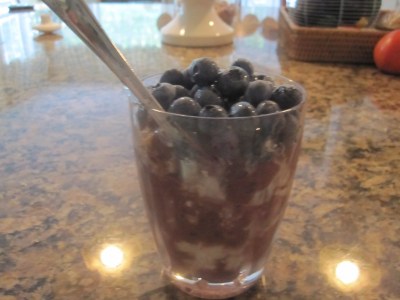 I wanted this to last forever.  It took me about half an hour to eat the whole thing.  I wanted it to go on, and on, and on, and on.  It was a gorgeous, delicious meal and once it settled into my stomach, it kept me full for about four hours, to the point where I wasn’t even the least bit hungry (although I did have two bites of freezing cold watermelon after I finished this up).
After that breakfast, how could lunch be anything less than a huge letdown?

This Sesame Goji Probar worried me.  I hadn’t heard good things about it, but at 400 calories, it was a good lunch substitute for me (and I could nibble it throughout my shift).  I packed it with a White Peach, and prayed it would either be delicious or satisfying, maybe even both.
Satisfying, yes.  Filling, certainly (I didn’t even need the other snack I brought and the peach wasn’t eaten till around 5ish).  But tasty? GOD, NO.  This thing tasted like the deepest bowels of hell.  It wasn’t even the actual taste of the bar, it was the aftertaste.  Goji is one of those things that is very hard to screw up, and I have no idea what kind of crap they put into this thing to make goji taste disgusting, but man, they really got it wrong this time.  And I usually LOVE Probars (their Nutty Banana Boom is an all-time fave).  Ah, well.
Dinner was great.  I left work craving a cheesesteak so I made a veggie one (not vegan, as I originally thought…the Veggie Slices I use contain milk proteins).  I also snacked a ton on carrots while I made this.

1 c Morningstar Farms Meal Starter Crumbles, onion, pepper, garlic, sauteed with cooking spray.  I spooned it over a Arnold’s Thin Roll with melted Veggie Slice Mozzarella, and poured ketchup on it.  I served it with steamed asparagus, although I forgot to cut the tough ends off and ended up trying to chew around them, which looked very attractive, I bet.
And I just polished off a chocolate chip Vita-Top with a smear of Stoneybrook Farms Organic Frozen Yogurt, some Fat Free Reddi-Whip, and a smear of Smucker’s Strawberry Jam.  One of my favorite desserts is a warm brownie topped with ice cream, and while this wasn’t exactly the same thing, it came pretty darn close!

I’m still a little peckish, though…that’s what a bad tummy will do to you.  You feel like not eating anything the entire day and suddenly you could devour your arm!
Dang, this post was LONG.  I swear I’m going to try and get better at logging every day.  I just get so sleepy at night (I’m so busy!), I drift off before I can post! 😦
I think a yogurt bowl is in order tomorrow morning…
Ally

2 thoughts on “I could really use a wish right now”