Oh boy.  I don’t have any pictures of my eats over the last few days.  They were pretty generic, aside from tonight and last night.  Last night I saw Maroon 5 at Mohegan Sun with my best friend, and I tried deep fried shrimp for the first time! Granted I only ate one but it was absolutely awesome.  We then split a warmed chocolate chip cookie.  My favorite.

Tonight, after a long day of traveling and watching my kids rehearse, as well as running around doing errands (and spending way too much money at Whole Foods!), I set out on a four mile run at about 6:30, completing it in under 40 minutes.  I was pleased, but I had had to stop about halfway through because my mind was convincing my body that it had had enough.  It was a gorgeous evening tonight, with a great breeze, so it wasn’t the heat that was doing it.  Too many stressors were going around in my head, ricocheting and banging off of my brain which then sent messages to my legs to slow it down.  Finally, I stopped on the side of the road, took a deep breath, felt the cool summer air on my face, and pushed on, completing the run in a good time.

You know what kept me going during my run? THIS.

You know what that is? That’s a buffalo chicken pizza.  For one.  No sharing.  All for me.

To make this, I warmed a La Tortilla Factory Low-Carb Whole Wheat Tortilla in the oven at 350 degrees.  While it baked, I sprayed a skillet with Pam and heated up the following:
1 handful artichoke hearts (nine I think)
1 handful baby spinach
1 garlic clove, in chunks (I would’ve minced it but I couldn’t find a cutting board)
1 handful red onion (that had some chunks of red pepper in it…my mom had diced it earlier this week so I got it from a ziplock)
I then added one very, very small precooked diced chicken breast that I had just covered a bit with my buffalo sauce, this random stuff I found at Stop N Shop.  It’s all natural with no sugar added so it’s 0 calories, but the lack of sweetness concentrates the hot pepper flavor.  It’s intense.  I wanted to hold back.  But I didn’t.
When the tortilla was crisp I took it out of the oven and spooned 1/4 cup marinara sauce, then my mixture on top.  I then topped it with a sprinkle of Mozzarella Veggie Shreds (although be warned all vegans, this stuff does contain casein, a milk protein!).

I then stuck the whole thing back into the oven and let it go until the shreds got a little melty.

I served it with-what else?-steamed asparagus.  It serves me right for buying it in bulk…

Perfect dinner. Next time I’ll have to try it straight up veggie with some tofu instead of the chicken.  But I will NOT be putting as much buffalo sauce on it next time.  I thought my mouth was going to fall off of my face.


A scoop of Edy’s Summer Peach Pie ice cream on top of a sliced peach cooled my tongue off right away.  Along with the last dying gasps left in my Reddi-Whip Free and a sprinkling of nutmeg and cinnamon.  It lent the dish a wonderful spice, but not too much, which is good because my mouth was going nuts. 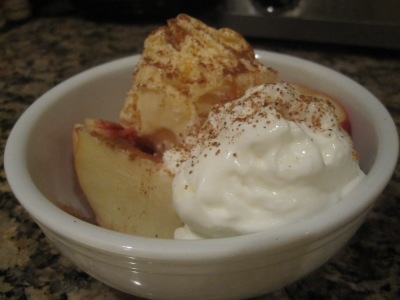 Now time to watch some of my new Wizard of Oz DVD and head to bed.  Night!