Oy.  Today was exhausting, and it was all mental.  And for the first time in a long, long time, exercise actually managed to clear my head instead of inviting new problems.

Yoga wasn’t very nice in that area, however.  I enjoyed the numerous chatarungas and down dogs, but my head-and heart-wasn’t in it.  At one point my yoga teacher mentioned to us that we should clear away any bad thoughts about things or people that were weighing us down and making us feel heavy.  I almost started crying right then and there.  Thankfully I had a great friend-my best friend-who helped me through the practice.

For lunch, as well as two humongous sliced up carrots (I think you all should just take it as a given that I eat a lot of carrots as a snack), I ended up finally having something that I’ve seen on the blogs and thought would either be amazing or totally disgusting.  I toasted two slices of light flax bread and in between I layered one Mozzarella Veggie Slice, spinach, 1/4 block Trader Joe’s tempeh….and concord grape jelly. 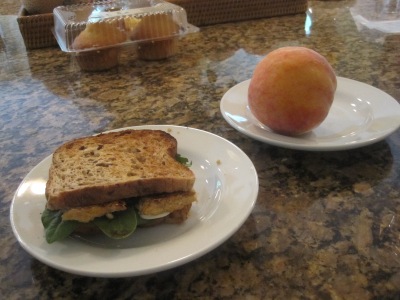 Sounds absolutely gross, right? Well it was delicious! I think what helped is that I dry-toasted the tempeh first to give it a crunch, and it blended very well with the jelly, cheese and spinach.  It is now on my list of favorite sandwiches! Other than turkey and artichoke, of course.

Alongside that sandwich I paired a giant peach, which I sliced.  It was a little underripe, but that just upped the crunch.

A little bit later, some pre-workout fuel in the form of a Chocolate Chip Brownie Larabar.

After that, I proceeded to do 40 minutes on the elliptical.  I was thrilled at how the Larabar fueled my workout, but also by how my stress seemed to melt with every push of my legs and pull of my arms.  I felt strong and cleansed afterward, whereas in other workouts back in the throes of my disorder I would be starved and lightheaded.

After a quick shower and prep, I was ready to eat.  Because of the Larabar, I wasn’t exactly in the mood to eat some more meatloaf (although my brother had no problem wolfing down exactly that!).  I preferred something light, but satisfying.  I ended up pulling out a can of Pacific Naturals Red Lentil Curry Soup.  I bulked it up with 1/3 a cup of Morningstar Farms Crumbles.

Served with a side of giant steamed asparagus (seriously, these things were the size of my arm), seasoned and dipped in a combination of hot sauce and ketchup.

Served with a Hearty Wasa Cracker.

I was new to this flavor of soup (although I’m a huge fan of curry) and I was very much enamored of it upon first bite.  It reminded me of their butternut squash soup, however it had much more of a kick to it from the curry.  The coconut in the mix itself lent it a nice flavor note.
For dessert? I told you all about my giant cache of frozen bananas.  There was only one way.

This time, I blended the frozen banana with 1/2 tbsp maple syrup, cinnamon and nutmeg.  I topped it with 1/2 tbsp Trader Joe’s Dark Chocolate Covered Pomegranate Arils and fat free whipped cream.
I’m delaying bites as I go. It’s just too good.
Tomorrow I have a dentist’s appointment at 9:30 and I’m thinking a SIAB is probably the way to go.  I’ll be taking the day off from a workout (my legs are calling for it!) and will be spending the rest of the day parked on either our deck chairs, or at the pool!