Man, this was so good. 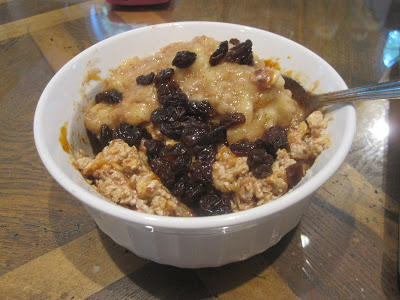 That would be pumpkin overnight oats, people.
I used my usual combination of oats, flax, and almond milk for soaking, but added pumpkin butter, nutmeg and cinnamon to the mix.  When I got up yesterday morning, I thought about making it a parfait but instead smushed up my last non-frozen banana with a tsp of almond butter and spread it on top of the raw oat mixture.  I topped the bowl with raisins and a drizzle of maple syrup.
Oh man.  This kept me stuffed for hours.  It made it almost impossible to have a full lunch! So I ended up having a tuna salad with Kashi crackers smeared with hummus and Marmite for dipping, and a Chobani Blueberry yogurt.
After an afternoon of shopping with my best friend, I was ready for a little snack but I wasn’t starving.  I enjoyed an orange drizzled with almond butter.

Don’t knock it until you try it.
Yesterday was full of almond butter, actually.  After a quick 40 minutes on the elliptical all I wanted was a SIAB, so that’s what I had for dinner.  Yup.  I had a big bowl of smoothie for dinner, and liked it.
In the blender I combined:
1/2 c frozen strawberries
1 smushy peach
Almond milk
Ground flax
Jarrow Chocolate Protein Powder
Baby spinach
xantham gum
Stevia
When it came out, I topped it with 1/4 cup of Chocolate Chunk Biscotti Granola, 2 chopped dates, and a blob of Maranatha Chocolate Almond Butter, which turned into a giant frozen slab.
I don’t think this really gives the impression of how humongous this bowl was. 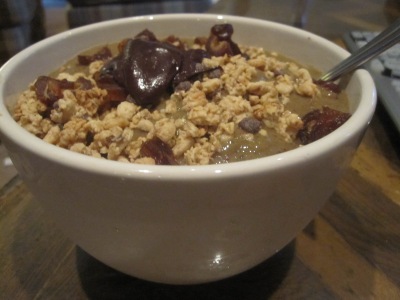 I was freezing cold after I ate this but oh, so happy.
A little while later I got a bit hungry and broke into a plum, and a little bit of FUDGE, as well as some unpictured cherries/grapes. 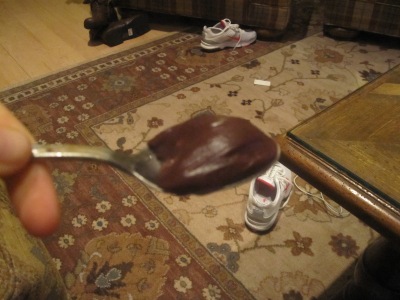 This morning, I woke up with a really sore throat, but I was determined to get through a run.  I banged out 4 miles on the treadmill.  I feel happy that I did it but I think I’m coming down with something.  This is not cool, considering I start grad school in a week!
I wanted another SIAB for breakfast so that’s exactly what I ate.  First, though, I wanted something salty.  I had 2 Wasa crackers slathered with Smart Balance and Marmite (I LOVE THIS STUFF SO MUCH)

Then the SIAB.  In this one I combined:
1 cup frozen blueberries
1 plum
almond milk
ground flax
Nutribiotic Vanilla Protein Powder
handful of baby spinach
xantham gum
almond extract
stevia
Then I topped it with 1 tbsp granola, blueberries and strawberries.

I was worried about how the smoothie color would turn out, but the addition of the plum turned it into a lovely eggplant shade.  I really enjoyed the flavor note the almond extract gave it…very sweet but with a nutty bite.
Now, off to crash on the couch and enjoy my day off, and hopefully not get too sick! 😦
ally