Today I felt like a child with my breakfast.  I didn’t smoosh it around or stuff it in my face and leave a giant mess.  But I did bring out a favorite from my youth after I caught it staring at me from my pantry.

That’s right.  I made Cream of Wheat.

I LOVED Cream of Wheat as a child.  There’s just something so comforting about it to me.  My mom would make it with water, then add a splash of milk at the end along with cinnamon and a buttload of sugar.  It was heaven.  Now, I decided to vegan it up a bit and add my own touch…a touch of Trader Joe’s Valencia Peanut Butter, obviously.

I combined 1.5 servings Cream of Wheat with 1 small peach, a handful of blueberries, two strawberries, and a blob of the peanut buttery goodness (I may have also swiped a fingerful of peanut butter straight from the jar, too).

That peanut butter is ridiculous.  I want it all the time.  I may dream about it.  We shall see.

Cooked oats are much, much easier for me to digest than overnight oats.  With overnight oats, as much as I love them, I’m constantly fighting off really awful bloating problems when I eat it.  I never have that problem when I eat hot oats.  Thankfully fall and winter are just around the corner and I can have a bowl of hot oats every day, without complaint! Although i will dearly miss my yogurt bowls.

Lunch was light, but satisfying.  I have been craving butternut squash soup in a major way (particularly the curried version by Barefoot Contessa) so I threw a carton of v8 Butternut Squash into the microwave, and then melted some Veggie Shreds on top of two Wasa Crackers for dunking. 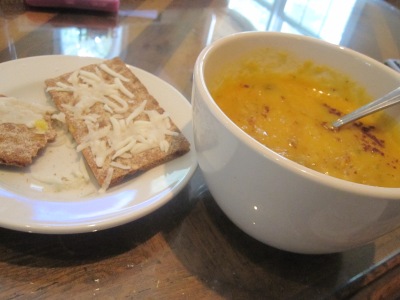 I also may have put some Mango Chutney in there…because that’s just how I roll.

Lunch dessert was a Wallaby Apple Caramel Fruit Down Under.  Good, but not as creamy/caramel-y as I was hoping. 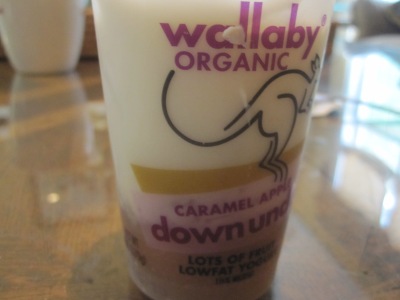 I’m really thinking about giving up all yogurt except Greek.  Greek is the only one that doesn’t rip up my gut.

Unpictured snack: my last pluot.  I LOVE these things.  I found out that officially, a pluot is 70% plum and 30% apricot.  They’re also called “dinosaur eggs” because of their speckled color.  So cute! So GOOD.

After tooling around for a little longer, I decided I would partake in some yoga with my best friend at our local studio.  One of our favorite instructors was teaching an All-Levels at 4:30.  I also decided, in my infinite wisdom, that I would go to the gym afterwards.

Before I swung over to pick up my friend I snacked on a Raw Revolution Tropical Banana bar.

Woah.  Holy banana! It was like eating a dried banana from Whole Foods.  Very delicious and not too sweet.

Yoga was just what we needed: relaxing but with a lot of stretching.  There was not one down dog in the entire hour and a half practice, which I loved because it shows how many more variations there are in yoga.  It was a great session.  I learned an amazing new move called Flamingo, which is hard to explain (it’s like Tree, only you bend your knee forward and hinge at the hip to try to touch your knee with your face).   Crescent Warrior opened my hips up so wide, I thought I was going to scream.

The best part? Savasana.  Now, I used to adore savasana as much as any normal person (it’s fifteen minutes of laying on your back, breathing deeply!).  Lately, however, with all of my stressors plaguing me, I haven’t been able to enjoy a deep meditation the way I used to.  Tonight, however? I was peaceful as a lamb.  To the point where I passed clear out and didn’t wake up until our instructor began to guide us out of the meditation.  I did NOT want to rise and namaste, preferring to just sleep more.  But I pulled myself up and did my duty as a proper novice yogini.  I call myself a novice because really, I’m still learning.  The only people who can call themselves proper yogi/yoginis are the ones who do it all the time, like my best friend.  I only do yoga 2-3 times a week.  Not enough for real yogini status, in my opinion.

After yoga, I had some life left in me after all, so I went to the gym and performed 45 minutes of intense intervals on the elliptical.  I left feeling refreshed and rejuvenated, but my tummy wanted to murder me.  It may have been…due to the massive amounts of gum I’ve eaten in the past two days.  And that soda I had yesterday.  Why do I do these things to myself?  No more gum for a WHILE for me!

Because my gut was ripped up, all I wanted to do was go home, maybe have a cup of soup, and head to bed.  But I knew I needed to refuel.  I plan on running in the morning, plus I had just burned major calories.  Despite my colon giving me fits, my stomach was empty.  So I quickly threw together a small, yet satisfying dinner, much like lunch!

I reheated a chicken breast my mom had cooked last night along with a Mozzarella Veggie Slice, and topped it with a little fig spread and mango chutney.  I served it in a slightly toasted sandwich thin with a bit of arugula. 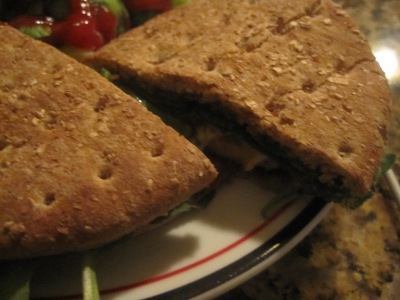 On the side? Steamed brussels sprouts with ketchup and bbq sauce.

Then for dessert, I wasn’t feeling any ice cream, but a bowl of fruit with some Cool Whip Free, Reddi-Whip, and a dash of orange liqueur balsamic vinegar I purchased on a whim about four months ago really hit the spot, along with a few grapes I snuck from the fridge.

Now I’m probably going to hit publish and pass out so I can catch up on my sleep.  I barely got six hours last night! Not typical at all of me!

Remember when you could pull an all-nighter and feel no pain? Ahhh, college.