Sometimes I feel really evil with the foods I eat.  They’re just too good to be good for you.  Right?

I mean, how can this gooey salty sweet delicious crunchy pile of awesome be healthy? 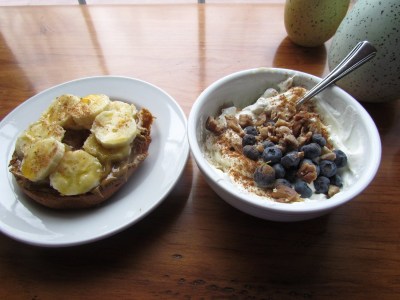 On the left: 1/2 an Udi’s Gluten Free Bagel topped with sunflower seed butter, 1/2 a GIANT sliced banana, nutmeg, and agave nectar.  On the right: 1 container of Fage 2% Greek Yogurt, topped with the rest of the banana, a handful of blubes and 2 roasted chestnuts crumbled on top.  Also in there is a pack of stevia plus more nutmeg.

This literally has every single thing I love in a breakfast aside from an apple.  An apple would have worked just as well instead of the banana, but instead of mixing it into the yogurt I would have sliced it and used it as a dipping mechanism.  Oh…and now I know what I’m gonna have tomorrow.  Sweet.

And what is that thing lurking in the center of this next picture? 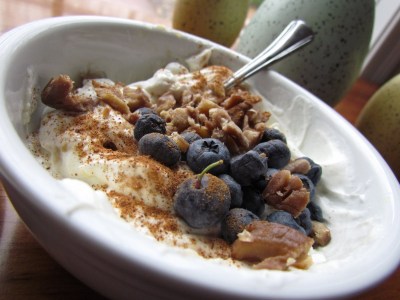 A stem! Hello there, stemmy! I plucked that little guy right out when I saw that.  And then I ate the blueberry, discarded the stem, and housed down my breakfast like it ain’t no thang.

Why am I evil, however? Aside from the fact that I just drank diet cherry soda.  This coming from a woman who really doesn’t like soda anymore.  But Jones Diet Black Cherry Soda is up there with Godliness.

Today was my day off from working out, which was great as I used it to really make a dent in some of my graduate papers.  I also made a pact to myself: I would try to eat the same wholesome meals I eat on the days where I work out.  I sometimes have a tendency to undereat on days where I don’t work out and this should stop, and I made a big effort to do that today!

For breakfast I had 2 pieces of gluten free toast for breakfast along with Greek yogurt and a sliced apple, and the toast was topped with lox and cream cheese.  I don’t know why, either. I’m on such a smoked salmon kick.  It’s surprisingly cheap at my grocery store (god, I hope that’s not code for ‘it’s SO likely to make you really really sick’).

Then after meeting a friend for coffee (I enjoyed a grande iced decaf Cafe Americano.  Delish!), I came home and enjoyed a turkey ‘unwich’, combining several thick slices of turkey with a piece of vegan cheese in a humongous Swiss Chard leaf, along with g-free crackers dipped in salsa, a bunch of steamed asparagus, and a humongous grapefruit.  My dinner was a can of doctored Butternut Squash Soup from V8 (still the greatest soup EVER) with 1 cup frozen kale and 1/2 cup frozen broccoli added to the liquid before I heated it up.  It turned out very thick and delicious! I paired it with a Flatout wrap stuffed with vegan cheese, Lentil Masala Dip from Trader Joe’s and spinach, along with a scoop or two of tomato paste.  It was delicious, filling and warming on this slightly cool night.

But this thing below? This might be the best thing you’ll have all week.  It’s not my original idea, unfortunately…I actually got the inspiration from Une Vie Saine, who uses a lot of peanut flour.  I was being very stingy with my PF but now that I know the name of the company Trader Joe’s bought their flour from, I can order it until I have peanut flour coming out of my eyeballs. 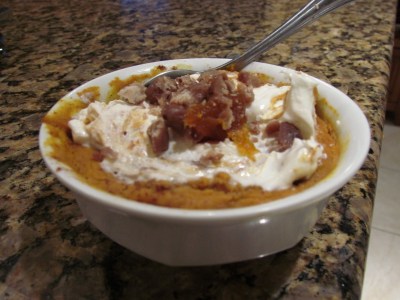 Peanut Butter Pumpkin Lava Mousse Cake of Awesomesauce-ness (VEGAN if you omit the frosting)
2.5 tbsps peanut flour (I use Trader Joe’s or their buying brand once I run out of the TJ’s kind!)
1/2 c canned pumpkin
1/4 c nondairy milk (I used unsweetened coconut milk from So Delicious but almond milk or soymilk would be just fine)
2 roasted chestnuts
Cinnamon and stevia to taste

Mix together and nuke for 3 minutes or until hard on the outside and gooey on the inside.  Top with chestnuts and frosting.

Frosting:
Cream Cheese (I used yogurt-strained cream cheese, which has more probiotics and much less cals/fat than regular cream cheese.  To go vegan use soy cream cheese such as Soya Kass, but I gotta be honest wtih you – vegan cream cheese tastes like where good cream cheeses go to die.  It’s AWFUL.)
stevia to taste
Mix 1 or 2 tbsps of cheese with stevia.  Spread over pumpkin concoction.

I can’t even put into words for you the gloriousness of this dessert.  It’s like crack but pumpkin pie crack, and the peanut flour gave it a rich taste.  I know it looks kind of gnarly but don’t judge a book by its cover.  And that whole dessert clocks in 150 calories.  Whaaaaat?!

If there’s one problem I had with it and with my dinner…so much fiber! What up, food baby.


My workouts have slowly gotten back to normal after my injury, although the first time I did yoga after a two week absence I thought my arms were going to fall off.  I even managed to do 45 minutes of a Billy Blanks Amped Bar DVD yesterday as well as ellipticize.  Felt awesome.  I really do feel better when I sweat.  Other wise I just feel kind of off.  Today I used the time I usually devote to a workout to studying, although I did go outside for about half an hour and shot some baskets in our driveway hoo  However, I haven’t done yoga in a few days.  That will change tomorrow.

Now, off to bed I go so I can get up early and do some cardio before class! I hope you all had a great Sunday!