Wow.  Has it really been almost a month since I’ve last updated? I’m so sorry!

I’ve been training for my marathon and despite being a little bit tired, I’m feeling pretty good.  My legs feel awesome, my back is holding up (thanks, Ion Bracelets) and I believe my weight is holding steady, despite putting on some water weight over the course of of the past two weeks.  I blame the copious amounts of Rainier and Bing cherries that are just now bursting into their full flavor.  Absolutely delicious.

As for the running, I set a PDR-Personal Distance Record-this weekend by running 7 MILES! I was so proud of myself, and I learned a great deal about myself while running that distance.  It wasn’t all at once, however.  My trail running buddy, Lauren, couldn’t run until 7:30 and I was worried about beating the heat, so I ended up running 3 miles at around 6:45, then driving to the trails and banging out the additional 4 with her, which was great because she kept my mind off the fact that holy shit I’m running 7 miles!  Judging by her GPS time and my speedy 3 mile run, I’d say I completed the 7 mile distance in about 65 minutes, which isn’t bad at all.  I booked the last mile because I heard the call of nature.  Running is good for that kind of stuff, isn’t it? It was a really fun run…we talked about Harry Potter and The Hunger Games and her upcoming wedding, and the miles flew by! We sprinted to the finish and she went home to nap and I went home and stuffed my face with an egg bagel and smoothie.

I also completely fell in love with trail running.  Not only was it cooler due to the heavy hanging trees overhead, but it was also very private and safe from cars, which as you have read are not my buddies anymore.  I ended up deciding to do all of my long runs from now on on the trails, as they’re flat and great for checking true speed and also there’s a lot of runners on the paths as well so I’ll feel safe even when Lauren isn’t with me.

For fueling, I’m going to try experimenting with different things.  I ate two pretty big Medjool dates before the run on Saturday, and I ended up having some pretty bad GI issues afterward.  That doesn’t happen when I have Clif Bloks, which have the sugar of dates but none of the fiber.  I’m going to try more of these and see where that takes me.

As for hunger, I’m really trying to be proactive and bring food with me when I need it, as well as listen when I’m not hungry at all and not eat.  I don’t want to lose weight, but I don’t want to gain, and about two weeks ago I could tell that my body was looking a little bit wan due to all of the extra running I was doing.  Thanks to weights and eating a bit extra, I look more filled out.  Thank goodness! And the weights are doing wonders for my yoga practice.  My arms feel so much stronger in chatarungas.

That’s the one thing that seems to be suffering at the same time, however…my yoga practice seems to be a bit lacking in the department of actually getting to a class.  Last week I ended up going to the 6AM class on Tuesday and I really enjoyed it so I think that’s what I’ll have to do for the next two months.  I’ll also try and see if I can keep going to Toby’s on Mondays, as her classes are notoriously hard but so freeing and lovely at the same time.  She teaches in the Baptiste style but also incorporates philosophy, the way Baptiste yogis usually don’t.  She rocks, and I always leave her classes sweaty but so satisfied and strong.

Oh, and I guess you should have a picture or two. 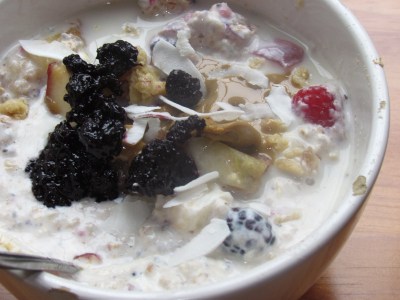 This was gone too soon.  Way, way too soon.