Harry: What does this song mean? My whole life, I don’t know what this song means. I mean, ‘Should old acquaintance be forgot’? Does that mean that we should forget old acquaintances, or does it mean if we happened to forget them, we should remember them, which is not possible because we already forgot?
Sally: Well, maybe it just means that we should remember that we forgot them or something. Anyway, it’s about old friends.
– When Harry Met Sally

I rang in 2013 in my pajamas, at a pajama party – best idea ever, i didn’t have to go shopping for a one-time-only-wear dress! – with a giant glass of wine, and spent the first day of the year in my pajamas watching The Dark Knight Rises and then practicing some hot yoga.  During my practice I thought about the previous year.

2012 was one of those years you look back on and think in stunned contemplation “Holy crap.  All of that happened this year?”  No wonder, then, that I have spent my holidays in a state of exhaustion.  I ended up contracting a horrendous cold the day before Christmas and spent Boxing Day in bed, wrapped up tight in blankets, trying not to cry with how absolutely disgusting I felt.  Today is the first day since December 22nd that I haven’t had a chest cough.  But hey, new year, new start, right?

So, without further adieu, I would like to present to you a simple list of Stuff I Did In 2012.

1. I learned what love is.  It’s about digging your heels in and doing the work.  It’s also about just being with the right person, someone who accepts you for exactly who you are.   I technically found that in 2011, but 2012 was the year in which I fell and fell HARD.  It’s the first time I am presenting myself in a relationship as myself, wholly and completely, and he says ‘yes’ to all of it.  It’s pretty amazing.  I hope all of you find a love like that.  I can’t wait to see what 2013 holds for us and the rest of the years we have.
2. Met incredible people.  Too many to list here.  All of them are precious, smart, hilarious, kind of insane, articulate, cool, and just decent people to be around.  Many of these friends I met due to #1 up there.
3. Um, went to the Olympics?! Also, toured a soccer stadium and went to Liverpool and went to Ireland and drank pear cider and ate all of the falafel in London and just oh my god can I go back to Europe?
4. Went to Maryland for a football game with a ton of my friends, stayed in a skeezy hotel, watched UConn beat the shit out of Maryland (BYE RANDY) and we got sort of famous because of our awesome bus.  ShowUsYourTDs! And of course I ate Maryland crab cakes.
5. Read the first three books and started the fourth book in George R.R. Martin’s A Song of Ice and Fire and got REALLY into Game of Thrones on HBO.  My friends hold watch parties every single week, with wine and book/show discussion.  It’s awesome.
6. Went to Maine and saw the Black Keys/Arctic Monkeys in concert
7. Ran an obstacle 5k with one of my friends and probably registering for it again this year.  Yeah Warrior Dash New England!
8. Realized I didn’t want to study Medieval Studies after all; I wanted to study Children’s Literature and the Graphic Novel.  Changing my focus was the best thing I’ve ever done for my career.
9.  Went to a Grad Prom
10. Chopped off all of my hair for a children’s charity.  It’s now at a longish bob length, which I really like, and all of that hair is now making a young girl with cancer look flaw free.  Yay!
11. Went from just running/yoga to running/yoga/crosstraining/weights/Jillian Michaels “Ripped” workouts.  My shirts don’t fit anymore.  My biceps are too cool for them.
12. Started watching shows I should have watched a while ago.  Arrested Development is hysterical.
13. Performed in The Vagina Monologues, which pretty much changed my life.
14. Spent the entire summer by the water in Niantic.
15. Completely gave up gluten and dairy for the sake of my tummy.
16.  Got accepted into a publication. Yep.  February 1st I’ll be handing in an article about The Hunger Games to a proposed anthology for publication next year.  I’ll be a published writer, and not just on a Blogger engine!

For 2013, I’ve got some goals.  Not so much ‘resolutions’ but ‘goals’ to help me throughout the year.

High Pass on the MA exam.  Teach in a way that is firm, constructive, educational, and fun.  Write and publish articles I’m proud of.  Confer and commence my degree from UConn.  Start looking at PhD programs.  Attend the Children’s Literature Conference in Biloxi, MI, in June.  Run a 1/2 Marathon (hopefully the West Haven Savin Rock 1/2 in March).  Cook something from my cookbooks or my Pinterest boards at least once a week because it’s getting kind of pathetic.  Get more pedicures to wind down.  Relax.  Read at least 3 Presidential biographies/autobiographies.  Do some form of yoga every single day.  Eat more whole foods and vegetables and not as much sugar and empty carbs.  Drink only once MAYBE twice a week.  Work on my relationships with my family, friends, boyfriend, and colleagues, so the lines of communication are always open and everyone operates on a level of transparency, as well as integrity.  See my friends more often.  Make plans.  Keep them.  Laugh more.  Dance more.  Sing more. 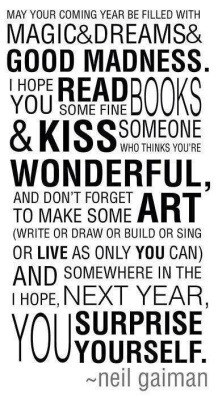 3 thoughts on “It’s about old friends.”